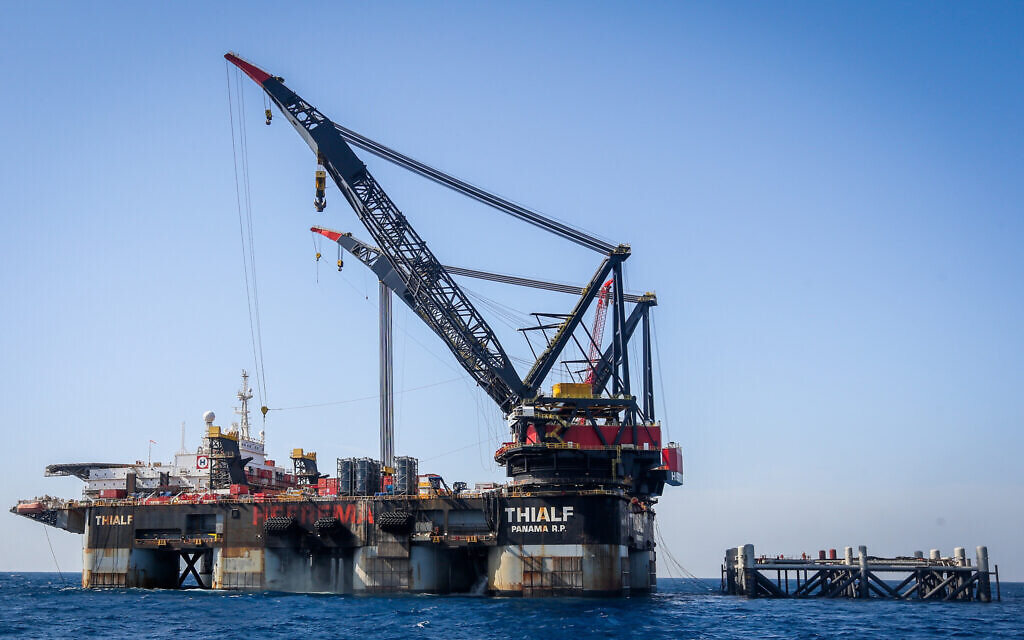 Israel would be ready to ease natural gas export quotas


An inter-ministerial committee tasked with setting natural gas policies has recommended that Israel increase the amount of fuel it exports to neighboring countries in light of reduced local consumption, the Calcalist financial website reported on Monday. .

Owners of Israel’s natural gas fields are allowed to export a total of 40 percent of the fuel produced per year, or some 830 billion cubic meters (BCM), Calcalist said. The recommended change is to increase the export quota to 52% of total annual production, the committee said.

The committee also said that if additional gas fields are in Israel’s territorial waters, no export quotas should be imposed at all.

In February, Egypt’s Minister of Oil and Mineral Resources Tarek el-Molla visited Israel, the first public visit by a senior Egyptian government official in five years. As part of the visit, the possibility of setting up an underwater pipeline between the Leviathan well and the liquefied natural gas (LNG) factories based in Egypt was raised, in order to stimulate exports to Europe, a said Calcalist.

The easing of the quota will lead to additional contracts with Egypt and Jordan, the committee said, and strengthen political ties between Israel and its Arab neighbors, thus establishing Israel as a regional energy force.

The committee is made up of members of the ministries of Energy, Finance, Justice, Foreign Affairs and Environment, the antitrust regulator, the National Economic Council and the National Security Council of Israel. In the coming days, the committee will release a draft proposal for public comment, after which a final report will be submitted for government approval, Calcalist said.

In October, the Israeli government set a target of having 30% of Israel’s electricity production come from renewable sources by 2030, which will result in lower consumption of natural gas locally. This will allow greater quantities of fuel to be exported, the committee believes.

The Leviathan field, the largest in the country, began pumping on December 31, 2019, followed in 2013 by the neighboring Tamar, the second largest, which contains some 10 trillion cubic feet (tcf) of natural gas, half of the amount held at Leviathan. Israel has been exporting gas from the Tamar field to Jordan since January 2017, and the Leviathan field began its exports to Egypt in January 2020. The Leviathan agreements are considered more important and important to the economy.

These two fields, along with the smaller Karish and Tanin fields, are considered a boon to a nation traditionally deprived of natural resources. They provide a stable source of locally produced energy from four different fields, leading to a more secure supply sufficient to meet all of Israel’s electricity needs for decades to come, and with the option of exports, open up the the way to regional natural gas diplomacy.

In July of last year, Chevron Corporation, the multinational energy company, announced that it had acquired Noble Energy, Inc, a US company with stakes in both Leviathan and Tamar. Other owners of the fields off Israel include Delek Drilling LP, Isramco Negev 2 LP, Ratio Oil Exploration (1992) LP and the Greek company Energean for the Karish and Tanin fields.

I am proud to work at The Times of Israel

I’ll tell you the truth: life here in Israel is not always easy. But it is full of beauty and meaning.

I am proud to work at The Times of Israel alongside colleagues who dedicate their hearts to their work day in and day out to capture the complexity of this extraordinary place.

I believe our reporting sets an important tone of honesty and decency which is essential for understanding what is really going on in Israel. It takes a lot of time, commitment and hard work on the part of our team to achieve this.

Your support, by joining The Times of Israel community, allows us to continue our work. Would you like to join our community today?

Join the Times of Israel community

Already a member? Log in to stop seeing this

Are you serious. We appreciate this!

We are really glad you read X Times of Israel Articles in the past month.

That’s why we come to work every day – to provide knowledgeable readers like you with must-see coverage of Israel and the Jewish world.

So now we have a request. Unlike other media, we have not set up a payment wall. But since the journalism we do is expensive, we invite readers for whom The Times of Israel has become important to help support our work by joining The Times of Israel community.

For as little as $ 6 per month, you can help support our quality journalism while benefiting from The Times of Israel WITHOUT ADVERTISING, as well as access to exclusive content available only to members of the Times of Israel community.

Already a member? Log in to stop seeing this