Credit bureaus such as CTOS collect and analyze information about consumers and businesses which produce reports which are then used by a myriad of organizations who find them useful, if not essential, in their dealings with their customers and clients.

In Malaysian companies, little is known about this industry, although StarBizWeek last year revealed that there are calm movements taking place in the industry.

In addition to the acquisition of CTOS by private equity firm Creador in 2014, the sale by RAM Holdings Bhd of its 33.15% stake in

CTOS already held a 16% stake in RAMCI, which it bought in July 2019 for RM 27 million from Omesti Bhd, listed on the main market. and therefore was a favorite for RAM’s stake in RAMCI. However, as a result of a sales process, a surprising bidder emerged as a winner, Ireland-based Experian, a global information services company that is strengthening its presence in the region. The deal was said to value RAMCI at nearly a record high of RM300 million, which was a high price-earnings multiple of about 65 times, indicating the growth potential of credit rating agencies. 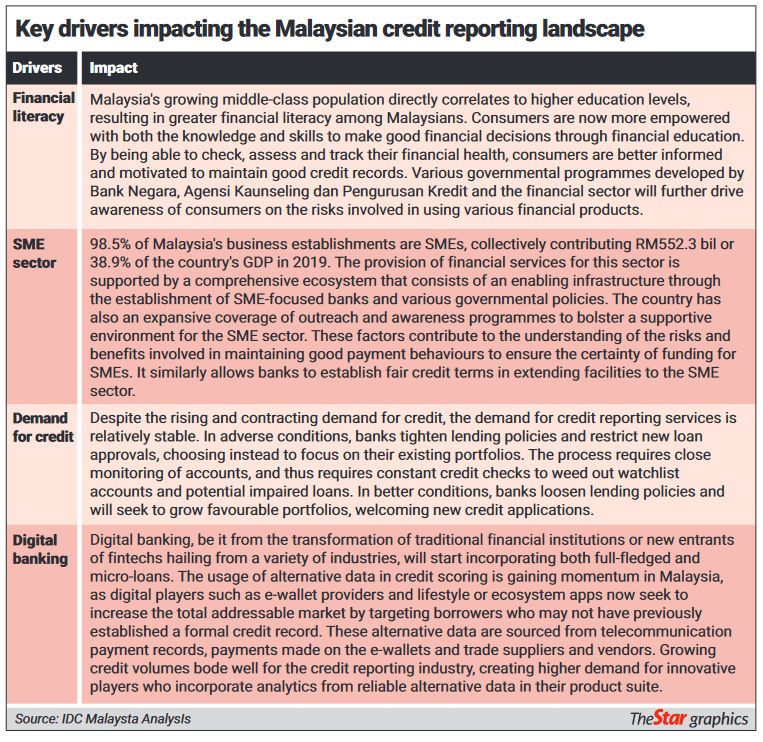 Today, CTOS holds 26% of the capital of RAMCI, since renamed Experian. CTOS is the market leader in Malaysia, followed by Experian.

The Malaysian credit rating industry has experienced a compound annual growth rate (CAGR) of 12.9% from 2016 to 2020. The industry’s revenue last year reached RM 225 million and is expected to nearly double to reach 406 million RM by 2025, predicts IDC Malaysia.

But it is the entire Asean region where the growth potential lies.

â€œDespite a large population, Asean’s credit reporting sector revenues are only a fraction of that of developed countries, indicating strong growth opportunities,â€ said Dennis Martin, CEO of the CTOS Group.

According to IDC’s market research report contained in the CTOS draft prospectus, Asean’s total credit report revenue for 2020 was only RM 991 mil for a population of 669 million. people. In contrast, the United States, which has a population of 331 million, enjoyed a turnover of RM 28 billion that year.

The US market is the birthplace of modern credit reports.

According to IDC, the United States is the largest market for credit reporting and operates largely on what they call the FICO score. Consumer credit has been a major driver of growth in the US credit reporting industry.

The second-largest market for credit reporting is the UK, which amounted to RM 3.9 billion last year, IDC points out.

At the same time, IDC estimates that the growth of the Asean region from 2021 to 2025 is expected to be 10.8% per year, well above that of developed markets such as the United States and the United Kingdom.

â€œAsean’s growth potential comes from increased penetration and use of credit reporting services and the expansion of other services such as analytics, eKYC, credit reporting automation. direct-to-consumer applications and services, building on its current base which has fewer products and services available to customers compared to developed countries, â€says IDC.

One of the reasons central banks around the world are supporting the growth of credit bureaus is that they tend to drive financial inclusion among the unbanked and underbanked populations. This is even more true in places like Asean.

However, the growth of these agencies is still nascent. But it also indicates significant growth opportunities for players like CTOS.

IDC points out that while markets such as Malaysia and Brunei have significant population coverage, large key markets such as the Philippines and Indonesia still have large segments that do not have credit report coverage. Myanmar just established its first credit bureau in 2020.

â€œThe coverage of a credit bureau is closely linked to access to financial services such as banking services. Markets with a high number of unbanked residents will also have a low number of credit registers, â€the research group points out.

Another interesting aspect of the growth of credit reports is the use of new technologies.

IDC notes that governments, the banking industry and many fintech players, through joint efforts with partners in other sectors such as telecommunications, have turned to alternative credit scoring techniques using behavioral data. and social as new models for assessing customer credit. â€œSuch programs have found good traction in markets such as Indonesia and the Philippines, with large and underserved populations.

â€œThe use of digital technologies to strengthen the coverage and capacity of credit reporting will be a key driver of financial inclusion and lending growth in ASEAN,â€ says IDC.

As for the Malaysian market, IDC says it is still in its early stages of growth, with a total addressable market expected to grow at a CAGR of 28.2% by 2025.

Various industries are expected to use more credit reporting services and local agencies are likely to create more industry specific solutions to meet the demand.

But IDC adds that “the largest vertical in value is and will remain with the financial services sector at RM 682.3 million in 2025”.